EDITOR’S NOTE: This is the third of three articles that make up Part 2 of a two-week special report in which South Dakota News Watch is examining the failure of the state’s public school system to adequately educate Native American students. Last week, News Watch examined the problem and its causes; this week’s material focuses on new and ongoing reform efforts and hopes for invigorating Native education in South Dakota.

As South Dakota education officials work to close the achievement gap between the state’s Native American students and their white peers, a private school just outside Chamberlain is finding great success with a unique set of programs and support.

St. Joseph’s Indian School is a Catholic residential school which, at the start of the 2019-20 school year, served as a second home to 221 Native American students from nearly all of the reservations in South Dakota. The school’s combination of support both inside and outside the classroom, as well as its culturally responsive teaching model, have greatly contributed to the success of its students, according to staff members.

Students in grades one through eight at St. Joseph’s don’t take the same standardized assessment tests as their peers in public school. Instead, the school relies on the Northwest Evaluation Association MAP tests to assess student progress, said school communications director Clare Willrodt. The school’s MAP test results show 85% of its students show grade-level improvement each year, she said.

From 2015 to 2018, about 96% of St. Joseph’s graduates were either in college, working or had joined the military, said Krista Lepkowski a counselor who works with St. Joseph’s high school students to make sure they’re ready for life after school.

“It’s fairly common for fifth-graders to come in and have second-grade reading and math levels. I mean, it’s more often than not. But we’re able to bring them up to grade level,” said Julie Soulek, who coordinates housing for the school’s first- through sixth-grade students.

Everything St. Joseph’s offers to its students, from the education to counseling to room and board, is free of charge, but that doesn’t mean it isn’t expensive. Since the school’s founding in 1927, it has relied on donations to provide such a comprehensive educational program.

According to the school’s 2018 financial report, more than 99% of the school’s $91 million in revenue that year came from donations, interest or investments. Most of the year’s revenue came in the form of $85 million worth of unrestricted donations. The school spent $38.9 million on education, which breaks down to roughly $176,018 per student per year.

The highest public school district expenditure per student in South Dakota came in at a little more than $21,000 during the 2018-19 school year in the SMEE District on the Standing Rock Indian Reservation, according to the state Department of Education. The per-student annual expenditure in Sioux Falls is $9,034 and $8,763 in Rapid City. 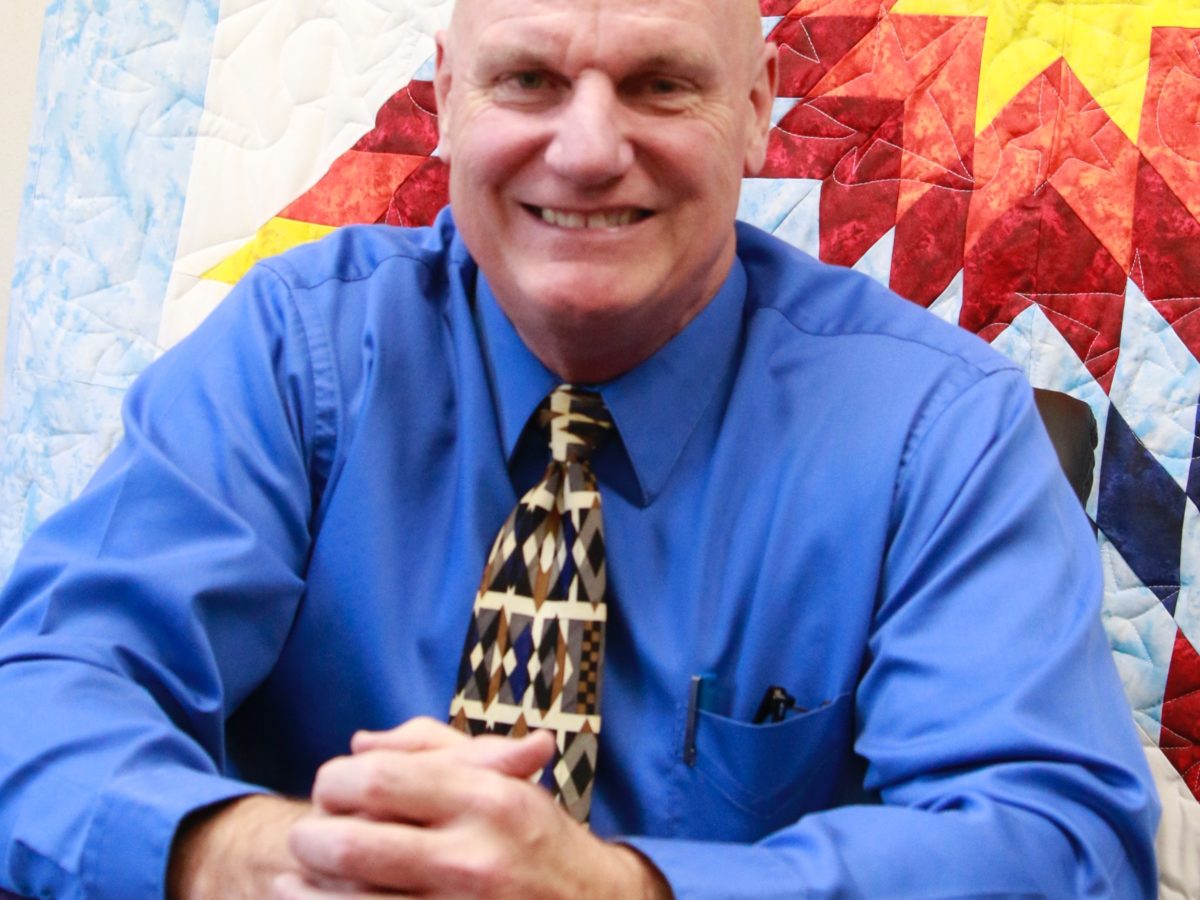 Mike Tyrell, president of the St. Joseph’s Indian School Board, said one of the most important things the school does for its students is to provide a safe, stable environment for students to learn and grow. Photo/video: Nick Lowrey, South Dakota News Watch
Play Video

Some lessons learned from the St. Joseph’s model can be applied elsewhere, including at schools that aren’t as well funded, said Mike Tyrell, president of the school’s board of directors. One of the biggest is that taking the time to build trust between a student and their school and its staff is key to student success; another is encouraging a high level of parental involvement.

“Students need to be able to trust their environment and if our (students) feel safe in their environment, they can excel in their learning,” Tyrell said. “Education is super important for the Native American kids that we serve, it’s an avenue for success, it’s an avenue for our kids to succeed and live up to their potential. So, it behooves us to do the best we possibly can to educate our kids.”

Most of St. Joseph’s 177 students in first through eighth grade and the 44 students in high school were enrolled by their parents, said Robin Knecht counseling services and admissions director. Applications can be made by any Native American family and then go through a review process.

Sending a child to a school, often more than 100 miles from their home, is never an easy decision, Knecht said. The choice is often based on expectations of top-notch academics, a high level of personal safety for students and programs that immerse students in Lakota culture, she said.

“We have a cultural component that is woven into every part of what St. Joe’s does. We have the unique ability to focus not only on this, the spiritual side of it, but also the cultural side as well,” Knecht said.

The school tries to get parents actively involved in their children’s schooling, even if they’re living far away. Between 60% and 65% of parents regularly participate in the “case service plans” set up for their children by school counselors, Soulek said. That process includes two in-person meetings with counselors and teachers, she said.

One of the biggest advantages of attending St. Joseph’s is that students receive extra support and stability compared to students in public schools. Trudy Williams, 16, who is in her fourth year at St. Joseph’s, said she attended four different schools before going to St. Joseph’s in seventh grade. Williams said she never had trouble making new friends when arriving at a new school, but that she often had to catch up or at least adjust to different styles of teaching.

Williams is now in the 11th grade at Chamberlain High School as part of St. Joseph’s high school program. She said the stability and support provided by the school’s staff have helped her feel more comfortable joining clubs at the public school. Williams also writes for Chamberlain High School’s school newspaper and is considering a career in journalism.

“They want you to be involved. If I wasn’t living here, I’d just want to go home after school,” Williams said.

The high school students live on St. Joseph’s campus in residences designed to be second homes. Each residence has a set of house parents who cook meals and help students out with homework. There are three residences for girls and two residences for boys. The high school students at St. Joseph’s also benefit from a new study center staffed by a tutor contracted by the school and decked out with a smart board and individual study rooms.

High school students do not attend school on the St. Joseph’s campus. Instead, they attend Chamberlain High School thanks to a partnership between the schools. Staff at both schools work closely together to ensure students are keeping up with assignments and are understanding their subjects.

Travis Hallock, who coordinates housing for St. Joseph’s high-schoolers and spends much of his time working with those students, said the school’s emphasis on support for its students plays out in unique ways. One example, he said, occurred last year. A student failed to turn in more than 50 assignments in one of his classes and was in danger of failing. But his house parents, Hallock and a counselor at St. Joseph’s were able to figure out that the student was doing the work, just not turning the assignments in because he had an issue with his teacher. Once the issue was worked out, Hallock said, the student got back on track.

Younger students, those who are in grades one through eight, also live in on-campus residences. Each residence houses up to 12 children who also attend school on campus. Those students get reading, writing, math, science and social studies lessons similar to any student in first through eighth grade. They also are learning the Lakota language and have classes dedicated to Native American studies, all in classes of about 12 students each.

St. Joseph’s has embraced the South Dakota Department of Education’s Oceti Sakowin Essential Understandings curriculum, Willrodt said. Teachers try to weave Lakota perspectives into each facet of the subjects they teach, she said.

St. Joseph’s is also home to a state-of-the-art clinic. Built in 2017, the building houses the school’s counselors, with one counselor for every 24 students. Each student is assigned a counselor who works with them to varying degrees on a near-weekly basis. Counselors have time to build relationships with the students and, in many cases, their families, which helps identify any additional needs students may have, said Rob West, who has been a counselor at St. Joseph’s for around 23 years.

The school clinic also contracts with a psychologist who visits campus three times a week and a psychiatrist who visits twice a month, Willrodt said. There are four full-time nurses and a doctor who is contracted through Sanford Health to provide physical health care on the school campus as well.