After 10 years in prison, woman vows to end meth addiction

The turbulent path that led Athanasia Comer of Sioux Falls to a life of drinking, drugs and a decade behind bars can be traced to the moment when she was 11 and her stepfather appeared in her bedroom naked.

Though he had been verbally and physically abusive in the past, the man did not touch Comer or her 4-year-old sister that night and left the room to pass out on the couch. But Comer, whose father was in prison at the time, knew things weren’t right, and she fled to a neighbor’s house to call her grandmother.

Her grandmother eventually took custody of Comer and her sister, but as a pre-teen Comer still could not find the support or stability she needed.

“Between 11 and 12, I just became angry,” Comer said. “My dad was in prison and my mom, I guess I felt like she really didn’t care because there was a lot of abuse and she didn’t do anything about it.”

Comer began experimenting with alcohol, then marijuana and finally with crank, the forerunner of methamphetamine. Soon after, she was a frequent visitor to juvenile justice programs and underwent her first drug treatment program at age 15. Unfortunately, the messages didn’t take hold.

At 17, she met a man 11 years her senior who she said was a drug dealer and soon she was pregnant. Later, with a 2-year-old daughter in their care, the couple was caught with a pound of marijuana and several grams of cocaine. Comer, then 20, was given a suspended sentence but relapsed with cocaine and went to jail.

Upon release, Comer began to sell meth, got caught using and then did a 5-year term in prison. After blowing second and third chances, she served the full sentence.

Released once again, Comer began selling and injecting meth. She met a man at a halfway house in Sioux Falls, got married and had a son. Comer said the boy’s father is also a drug addict who has served time in jail.

Two years later, Comer was arrested again after selling the drug ecstasy to an undercover police informant. She served prison time, but got out and said she was stable for a time.

“I’m not going to say it was her, it was totally me. But it wasn’t a good combination. We were obviously struggling and neither of us could help the other,” Comer said. “We just fed on each other’s toxicity.”

Comer was on the run from outstanding warrants and recalls that, “I was using pretty hard, doing whatever drugs I could, using needles.” During her time away, Comer said her daughter was sexually abused by a man who is now in prison for those acts.

Comer’s life stabilized somewhat and she started dating a recovering addict. She planned to turn herself in after her daughter’s wedding, and had even contacted authorities and told them her plan, but got arrested on drug charges two weeks before the wedding.

Comer said she is pleased but also shocked that her adult daughter is leading a productive, sober life. She worries about her 9-year-old son, who is being cared for by his aunt. He recently was involved in a custody battle and forced to live for a time with his dad’s girlfriend, who he hardly knew.

“Honestly, he’s angry, he’s a very angry kid,” Comer said. “He tells me all the time, ‘I don’t want to live with you,’ and I really don’t know what to say about that. It doesn’t make me feel like a good mom, that’s for sure.”

Off and on, Comer has spent roughly a decade in prison, and she now swears that she is done with the drinking, drugging and desertion of her son and daughter, who now has a son of her own.

In a recent, in-depth interview in a classroom at the South Dakota Women’s Prison in Pierre, Comer, 38, was often awash in sadness, guilt and regret revealed in long pauses or silent downward gazes. Her smile is wide and welcoming, but does not come easily. In her current sober state, she appears thoughtful and kind, and it is hard to see her as someone who betrayed others and herself.

“I’ve been over it, and when I mean over it, I’m done with this life,” she said. “I feel like South Dakota has gotten a lot of my time, my kids have been without a mother, and I don’t really want to not know my grandson. I’m just tired, tired of this life, really.”

Comer has plenty of time to make amends in what she promises will be a reentry and recovery process moved forward in “baby steps.”

She was released on Oct. 30, her birthday, and has returned to Sioux Falls where she is on parole and under supervision of a state parole agent. 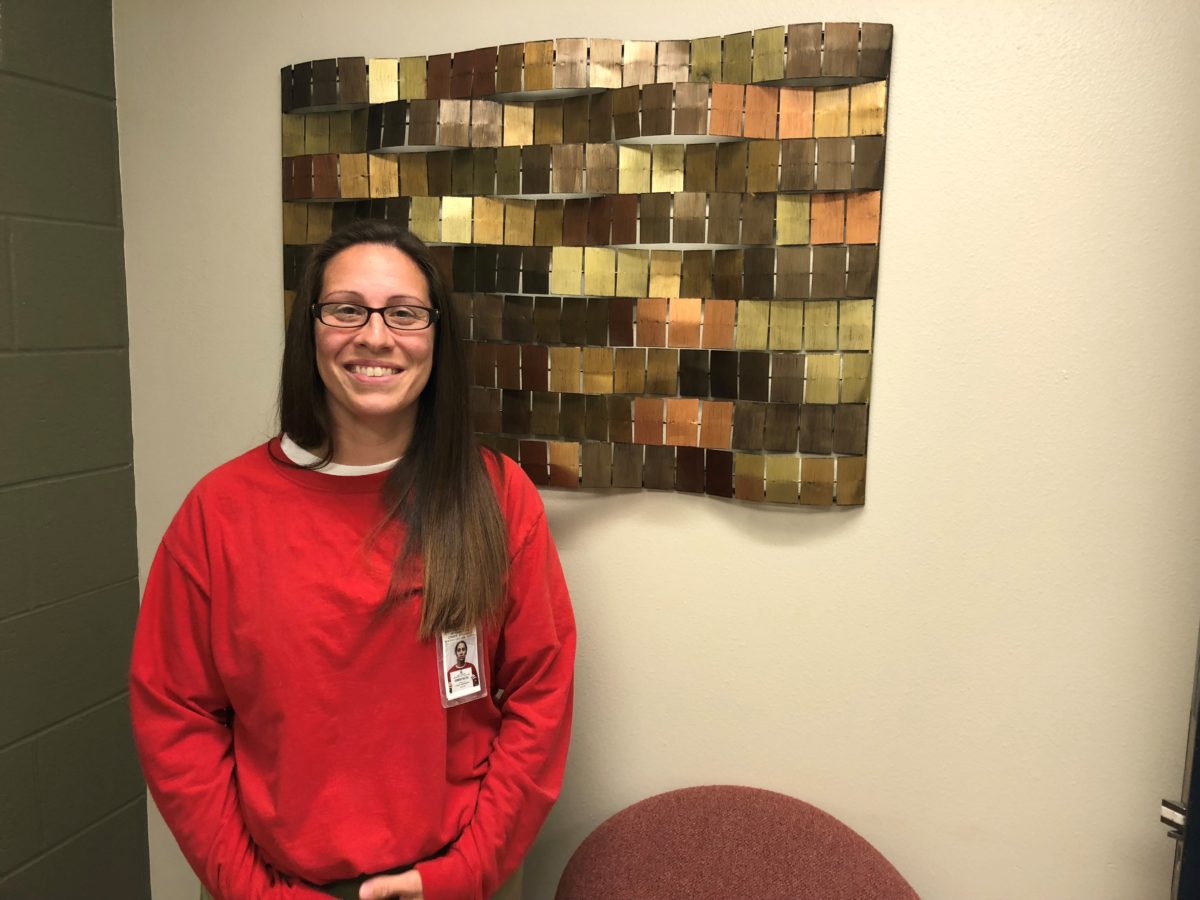 Athanasia Comer was released from prison on Oct. 30. Interviewed near the end of her prison term, she said she will work to build a new life and rebuild relationships with her children in "baby steps." Photo/Video: Bart Pfankuch
Play Video