The Drumgoon Dairy in Lake Norden, S.D., is one of only a handful of dairies in the state to use a fully robotic milking system. Here are some basics on the operation run by Rodney Elliott, a native of Northern Ireland who has run one of South Dakota’s fastest growing, most advanced and most successful dairy operations since 2006.

— Robotic milking began at Drumgoon in late January 2021, and eventually will include 20 robotic milking machines and cost a total of $12 million.

— Cows are trained to move on their own through a large rectangular pen outfitted with a series of one-way gates separating areas where they are fed, watered and rested before entering the gated “box” where milking takes place.

—  Inside the milking “box,” a robotic arm outfitted with a high-definition camera identifies and cleans each cow’s teats, hooks up milking suction cups, collects the milk, then cleans the cow’s teats and the camera before the next cow arrives.

— Benefits of the system include reduction of personnel costs, greater cleanliness and animal comfort, improved milk production of each cow and the herd as a whole, and a computer system that identifies and tracks each cow and monitors the entire system.

Drumgoon Dairy operator Rodney Elliott was hesitant to invest in robotic milking but changed his mind after the Swedish manufacturing company DeLaval sent him on trips to Chile and Canada to see the robotics up close. 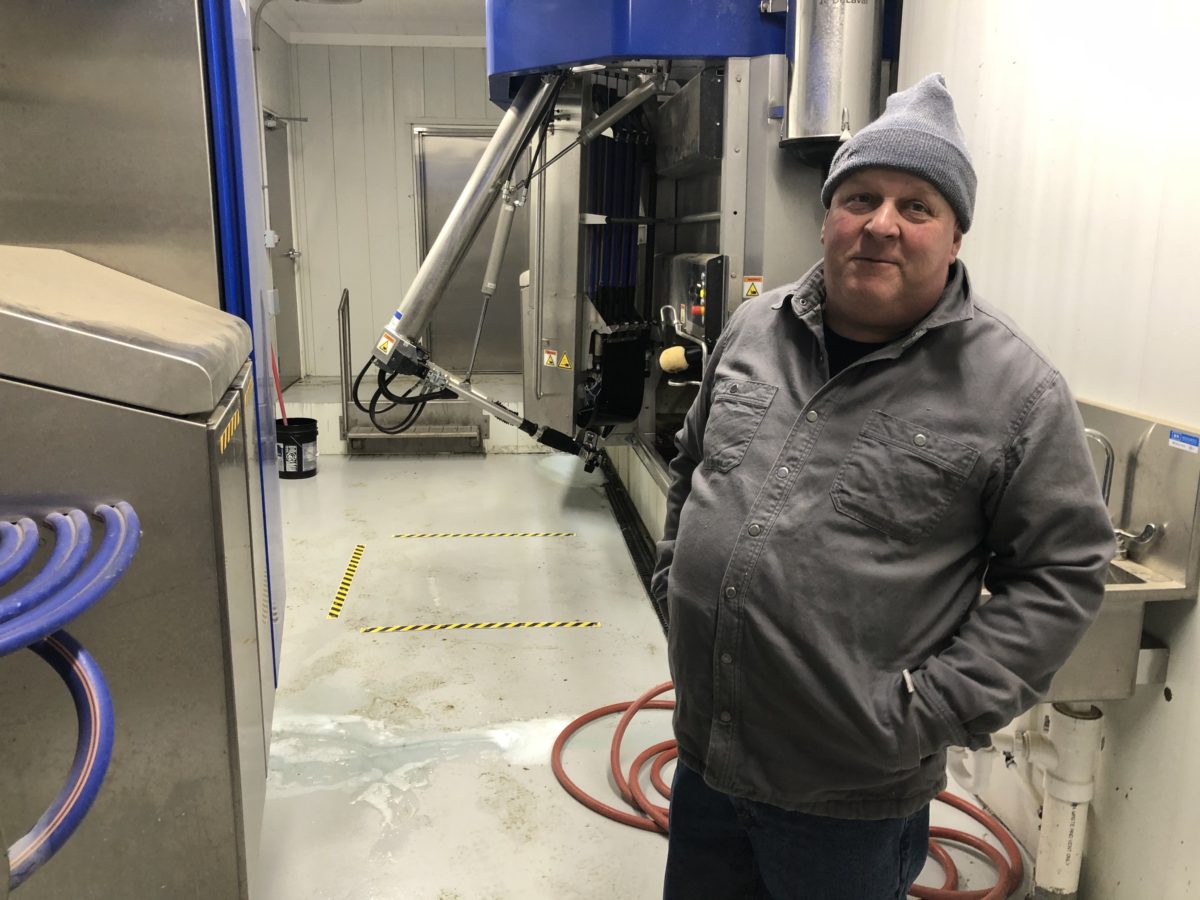 IT ALL STARTS HERE … WITH COWS ON FEED

The cows start the entire process by consuming as much feed and water as they wish before walking through one-way gates to the next stop in the process.

AFTER FEEDING, COWS MOVE AROUND THE RECTANGLE TO A BEDDING AREA TO REST

Once they eat and drink to fullness, the cows make their way to the other side of the rectangular pen and bed down in sand, where they begin to form more milk. Cows can also scratch any itches by standing next to an automated twirling brush.

NOW READY FOR MILKING, COWS QUEUE UP AND AWAIT THEIR TURN TO ENTER THE MILKING “BOX”

After resting and producing milk, cows make their way forward to the end of the rectangle where the milking “box” is located. Cows are lured with a small bit of food to fully enter the box and stand (mostly) still as the robotic milking machine takes over the process.

Dairy operator Rodney Elliott’s voice can be heard on the video.

The first segment shows the robotic arm equipped with a high-definition camera using air and water to clean teats before milking.

The second segment shows the robotic arm attaching a milking cup and hose that carries the milk to a tank within the milking machine.

The final segment shows a gate opening and allowing a freshly milked cow to exit and head to a feeding area, making room for the next cow to enter the milking chamber. 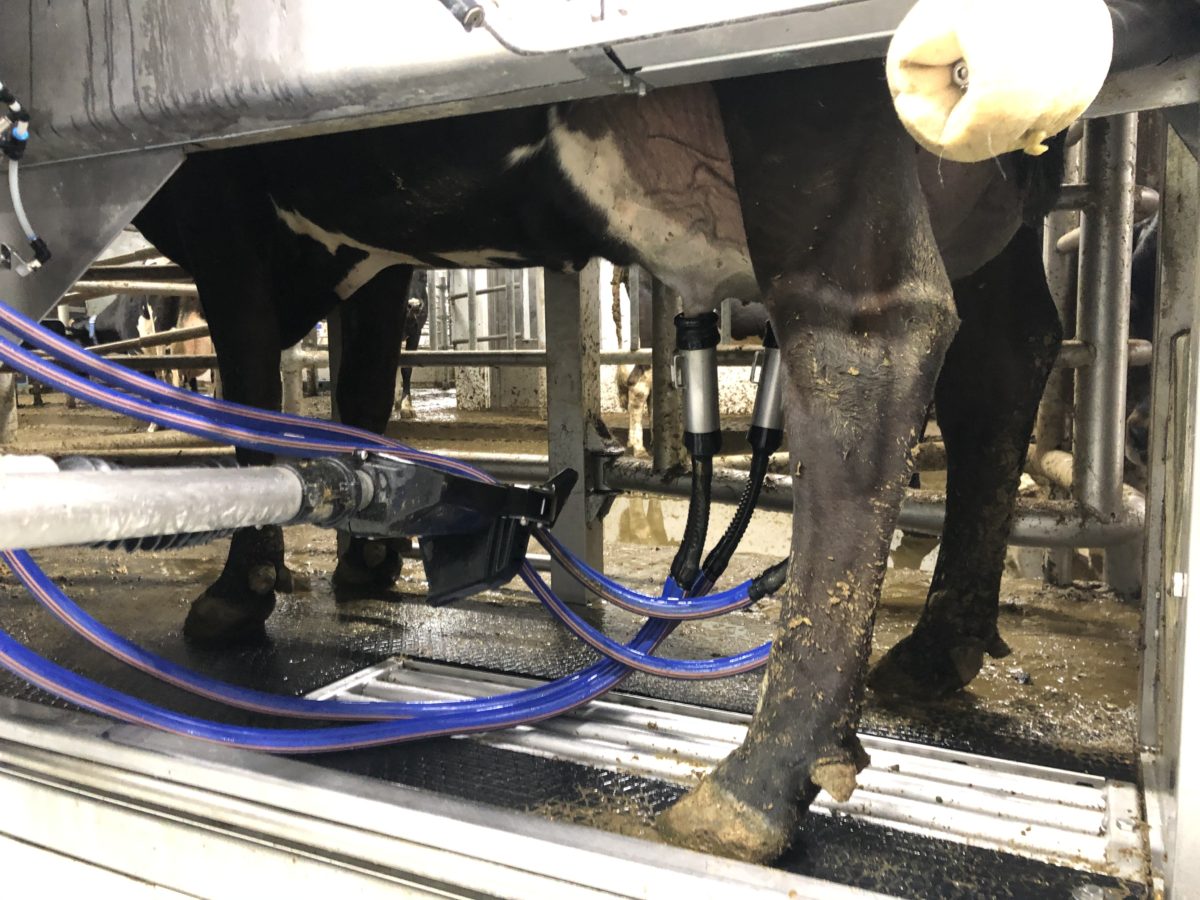 Dairy operator Rodney Elliott explains the end of the process of milking a cow in the “box,” which takes about five or six minutes. When finished, the milking machine retracts the cups into the machine, where they are washed.

Then, the robot arm applies disinfectant before the gate opens and the cow exits. As the next cow enters, the robotic camera cleans itself before cleaning the teats of the next cow. 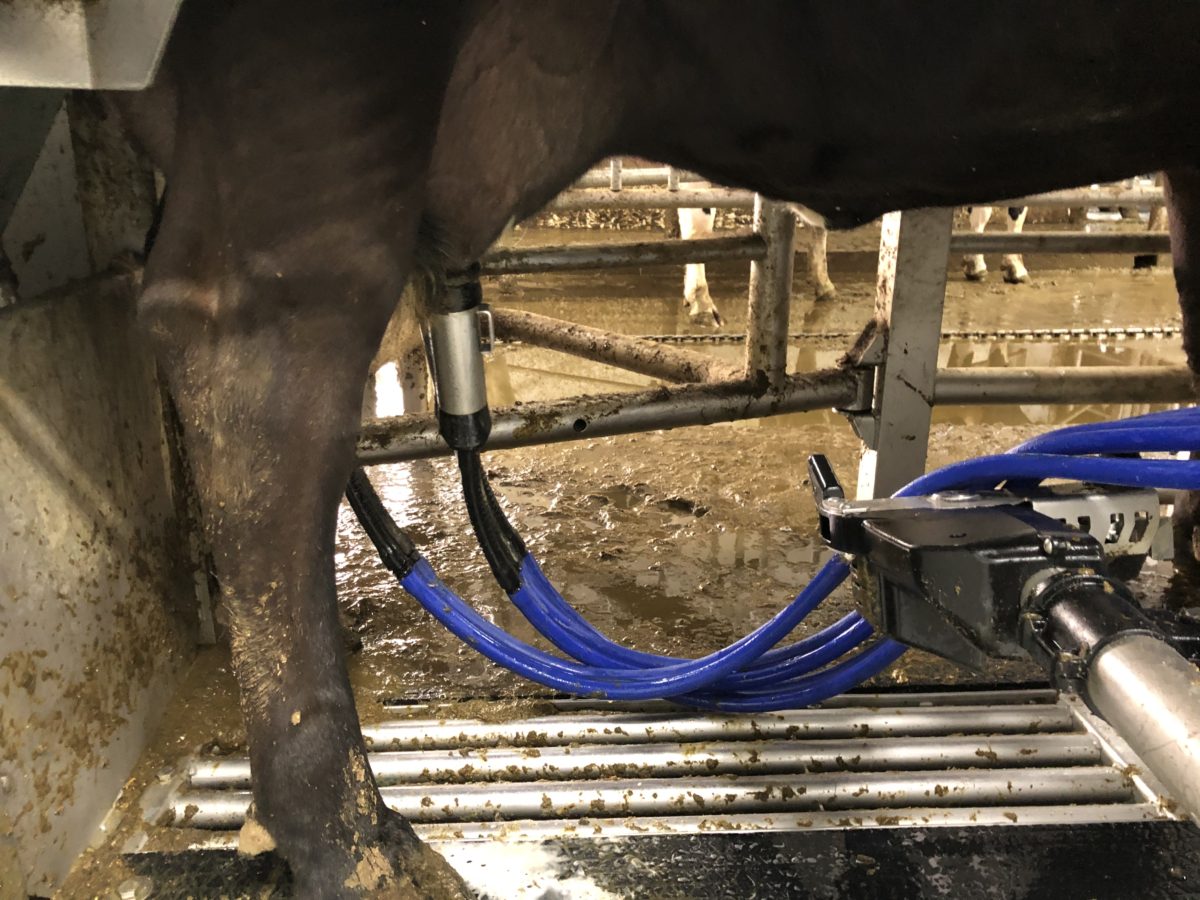 Dairy operator Rodney Elliott explains some functions of the monitor that captures and displays data about each cow and its teats. The robotics are contained within a small chamber between two milking “boxes” where a farmer can walk in, watch the process and check the machinery and computer to monitor progress. 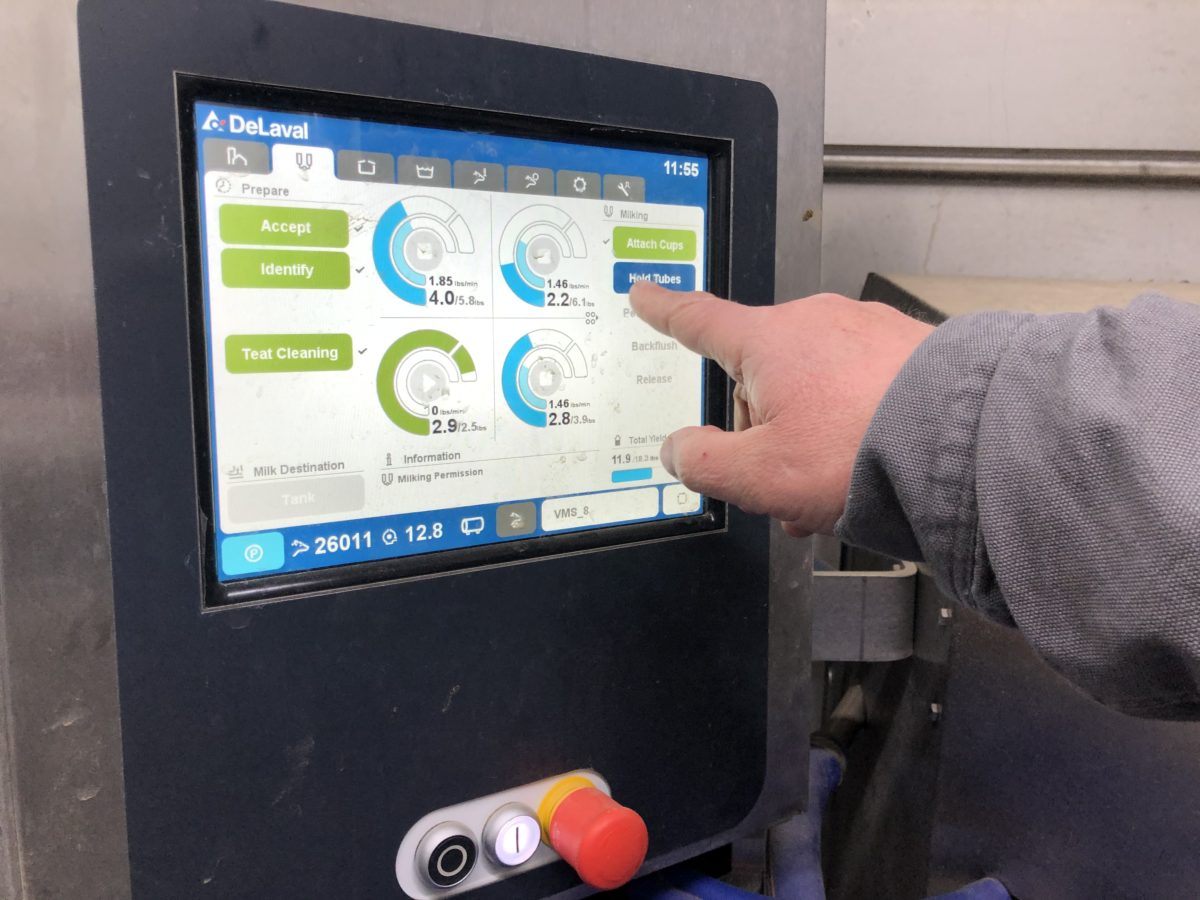 A computer screen at each milking station provides data about the ongoing milking process and production of each teat and also the history of each cow being milked.
Play Video

After robotic milking ends, a gate opens and the cows walk forward and out of the  milking “box.” They follow a series of fences around the oval pen that lead them back to the feeding area to restart the process that occurs up to three times daily for each cow.