Producers of meat substitute products have developed technologically advanced non-meat hamburgers – some that even mimic the bloody juices of real beef – and the new products have South Dakota beef industry groups concerned and fighting back.

Some in the beef industry claim that plant-based producers are misleading consumers through inventive packaging and marketing. Cattle ranchers and other livestock groups are pushing for stricter product labeling and stronger enforcement of existing labeling rules to ensure consumers know what they’re buying and to prevent non-meat producers from unfairly stealing their customers.

Beef producers in South Dakota are also concerned about ongoing attempts by scientists to produce lab-created meats that could in the next few years reduce the demand for beef and threaten ranchers’ livelihood.

Two new products in particular– Impossible Foods burgers and those from Beyond Meat – have exploded in popularity with health-conscious consumers and those who don’t want animals to be killed for food. Those companies use new processes to heighten the flavor, browning, and “mouth feel” of plant-based burgers, including the addition of beet juice to create pink textures and the impression that the burgers bleed and sizzle when cooked.

Impossible Foods burgers are available mainly at restaurants, while Beyond Meat products are now on sale at retail stores in Sioux Falls and Rapid City.

Beef producers and industry groups are comforted by the fact that American beef consumption is at an all-time high and prices remain stable. Still, they are monitoring the growth of plant-based products closely amid concerns that any reduction in market share would hurt the $3 billion livestock industry in South Dakota and devastate farm families and local economies.

“If that fake beef would ever take hold, you’d put a big part of Rapid City out of business,” said David Uhrig, who runs an Angus cattle ranch in southern Pennington County. “You take all those dollars that aren’t being spent in every community across the state of South Dakota, and those communities are going to shrivel up like a raisin.”

In just the past few years, plant-based food manufacturers have evolved from bland tofu or soy burgers first rolled out in the early 1980s to new products that look, feel, taste and are packaged more like ground beef or pork.

According to industry reports, Beyond Meat uses yeast extract, coconut oil and peas to create meaty texture and the beet juice is added for a pink color and the apparent appearance of real blood.

A representative of California-based Beyond Meat said in an email that the company’s products are tasty and a good source of protein. The representative said the company’s latest product, Beyond Sausage, was rolled out in mid-April at the nearly 500 stores in the Whole Foods grocery chain. The company’s products are touted as a healthy way to get plant-based protein, to avoid the slaughter of animals and to reduce environmental impacts of livestock production. The meatless products are shaped and packaged much like other pre-formed burger patties or bratwurst.

“Beyond Sausage is the world’s first plant-based sausage that sizzles, snaps and satisfies like pork sausage while offering a better solution for consumers’ health and the planet,” the company representative said in the email.

Beyond Beef burgers are available at many Wal-Mart stores and health food outlets like The Market in Tuscany Square in Rapid City and Co-Op Natural Foods on West 18th Street in Sioux Falls.

Co-op Grocery Manager Mark Leemkuil said “The Beyond Burger” made by Beyond Meat is the top seller among the roughly 30 plant-based meat substitute products available at the store.

“It’s by far the most realistic and cooks and smells most like a real burger,” he said. “When you put it on the grill it has that realistic sizzle and juices on it. I’ve had them and they’re really good.”

The Beyond Burger is packaged in a tan cardboard sleeve with a window showing one pink patty and notes in green lettering below the name that it contains “plant-based burger patties.” It retails for $6.99 for two quarter-pound patties.

Leemkuil said the manufacturer suggested to him that the product should be displayed next to actual pre-formed beef patties. “That’s one of their recommendations, that you should stock it in your meat case next to ground beef or pre-formed beef patties if you have them, and not to have their product segregated away with the vegan food where some people who are meat eaters won’t ever look,” Leemkuil said. “I think they’re maybe trying to appeal toward vegans but also people who are not traditionally trying meat-free or plant-based foods.”

The use of the word “meat” anywhere on the product label doesn’t sit well with beef producers and the industry.

“I think there’s some design there to, if not outright trick, then definitely to mislead consumers about what they’re purchasing,” said Silvia Christen, executive director of the South Dakota Stockgrower’s Association. “There’s a lot of technology and weird science being applied to invent things that mimic meat products.”

Christen said one component of her job is to educate the public about how ranchers operate and the care they take in raising animals. If anyone questions the commitment, Christen urged them to look on Facebook to see images of ranchers protecting their animals during the recent blizzards that blanketed the state with wet, heavy snow.

“We saw ranch families working around the clock to protect their livestock, even taking baby calves into their kitchens,” she said.

The risk to the South Dakota economy is significant. South Dakota is ninth in annual beef production in the country, with half of all farms in the state raising cattle, a total of about 3.85 million head a year. About 11,600 jobs are created by the South Dakota beef industry, which pays about 84 million in taxes each year and creates an estimated $2.8 billion overall economic impact, according to the state Department of Agriculture.

Both state and national groups are getting aggressive in protecting the beef industry.

In February, the U.S. Cattleman’s Association filed a petition asking the U.S. Department of Agriculture to force the agency to specifically define “beef” and “meat” as products that come from animals and not plants or genetically induced products from a lab.

After Congress punted on efforts to enact so-called COOL, or country of original labeling, requirements on food sold in the United States, South Dakota state Sen. Ryan Maher tried unsuccessfully in 2017 to pass a similar law at the state level. The bill would have required manufacturers to include the country of origin on food products and provided specific definitions of beef and ground beef.

Maher, who is from a cattle ranching family in Isabel in rural Dewey County, is an insurance broker who also runs a restaurant called Sparky’s Bar and Grill where beef burgers and steaks are “the only thing we have on the menu because nothing else sells.”

Maher said the measure would have strengthened the position of South Dakota beef producers in the global market and was being watched closely by lawmakers in neighboring states who saw the bill as a potential model. The bill was narrowly defeated, however, over concerns about the cost of labeling and government interference in private industry.

Maher said he will continue to push for stricter labeling laws and enforcement so consumers know exactly what they are buying.

The beef industry is also concerned about how its products are viewed by members of the millennial generation who may be less trusting of industry and pickier about what they eat and how it is produced. The South Dakota Beef Industry Council published a report in March, 2017 noting that the millennials are 80 million strong and should be a major target of future advertising and education.

Suzy Geppert, executive director of the beef council, said she is confident producers can overcome concerns by young people by letting them know the true story of beef production.

“As long as we tell them where their product originates, that it’s coming from a family operation, we’ll be fine,” Geppert said. “That’s a story we’re going to continue to tell whether it’s to millennials, our elderly or to your youth.”

Uhrig, the Pennington County rancher who has won awards for his cattle breeding skills, said the cattle he raises are treated humanely and are bred to produce the best beef possible. Uhrig manages the Mount Rushmore Angus Ranch where he breeds 400 to 500 cows annually and sells off about 150 bulls each spring.

Uhrig, a married father of two who lives on a hillside above the ranch, said it bothers him that the producer of a plant-based food would go to such great lengths to mimic the meat he works so hard to perfect.

“I’m not fond of them placing it right beside meat products and camouflaging it as meat when it’s not,” Uhrig said. “Farmers are already under attack from every angle, and if it’s not environmentalists, it’s companies like this.”

But some in the beef industry see no reason to panic.

Geppert, whose group represents many of the state’s 15,000 cattle ranchers, notes that American farmers produce about 31.4 billion pounds of beef a year and that the average consumer ate 222 pounds of beef and poultry last year.

Geppert said the beef industry has a wholesome story to tell about farms and families, and that the high-quality beef produced in South Dakota and elsewhere essentially “sells itself.”

“Our farmers and ranchers just need to tell their story, that these are family-built operations from pasture to plate,” Geppert said. “We’re families feeding families, and that can’t be replaced in a lab.” 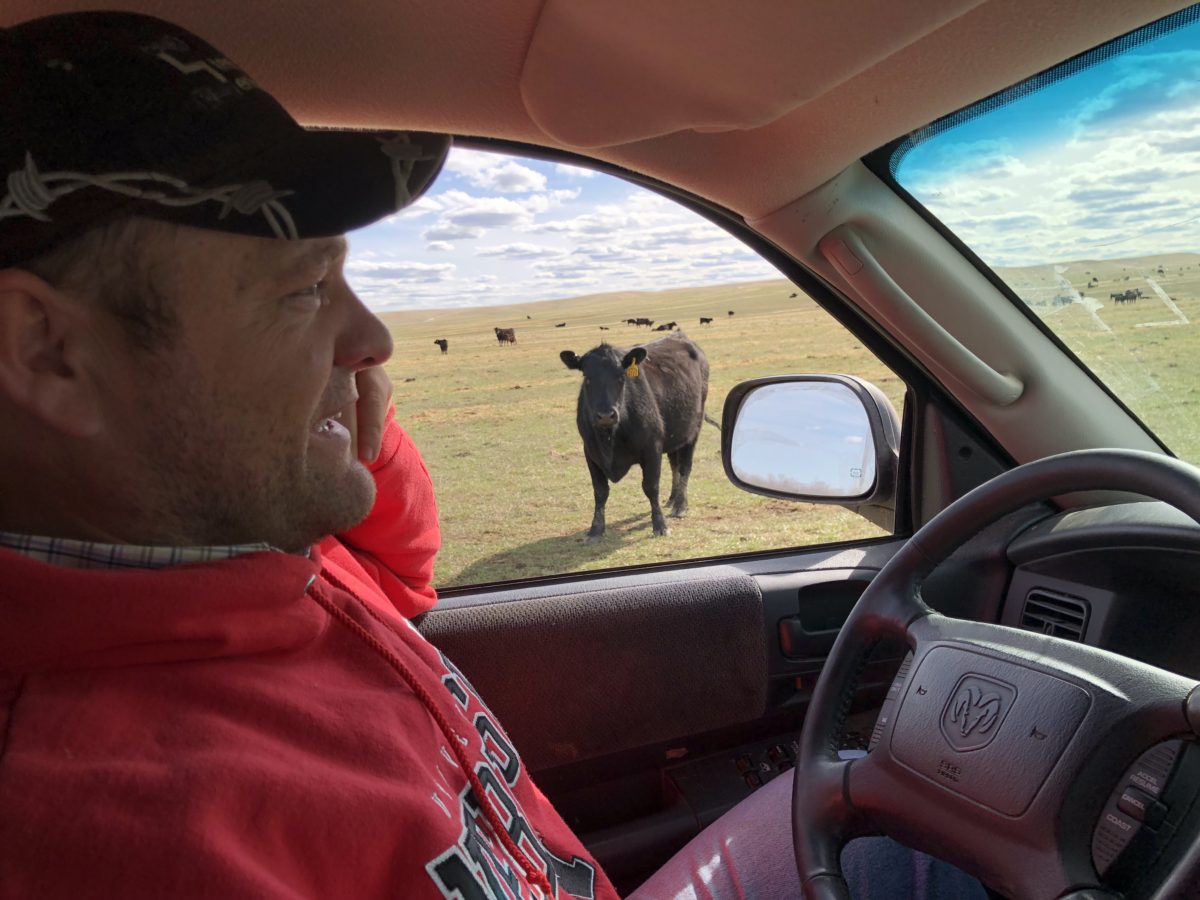