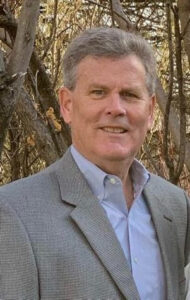 Mark Roby, of Watertown, worked part-time as a sports reporter at the Watertown Public Opinion in high school before embarking a successful career in the corporate world.  He would return to Watertown in 2002 to be publisher of the Public Opinion. He retired as president and regional publisher of the Dakota Media Group (consisting of newspapers in Watertown and Aberdeen) in 2017.  Mark was president of the South Dakota Newspaper Association in 2008-09 and a founding board member of South Dakota News Watch from 2016-2017.

Although no longer in the “news game,” Mark is still a highly passionate journalist with a love for South Dakota.  We asked Mark to sit down earlier this month and do a short Q&A with News Watch.  Here’s what he had to say.

What got you interested in journalism?  How did you become the publisher of the Watertown Public Opinion?
My father was the P/O business manager from 1960 to his retirement in 1991; my first job was chief substitute carrier for my two older brothers on their paper route, followed by a stint as a part-time high school sports reporter.  I also had jobs at our local radio station, including time as news director.  Those experiences fueled my interest in journalism.  When my high school friend, Steve Lowrie, publisher, decided to sell the P/O to Howard J. Brown, owner of UCC, he recommended Howard contact me as a publisher candidate to replace him. A couple of months later I was named publisher of my hometown paper.

So many changes have taken place with regard to the press and media in just the last few years.  What concerns you about journalism these days, or the way South Dakotans get their news and information?
My biggest concern is reporting of local news.  Both good and bad news.  The national and even most state news will get reported, but I am concerned about coverage of our local government, sports teams, schools, life events, and all that makes our city a community.  The number of local “on the street” reporters has been cut, more than the casual readers knows.  And as a result there is simply too much going on with no reporters attending to cover what we have become accustomed to over the past 150 years.

Next, but not nearly as big, is the increase in unedited, unverifiable, often unbelievable rise in social media … and how people have come to depend upon this as their news source.  The line “I found it on the Internet, so it must be true” is only becoming worse, and more unbelievable than ever with the continuing demise of local news  reporting.

What inspired you to become a donor to South Dakota News Watch?
In my final years as regional publisher, the decline in state news coverage was readily apparent.  The Associated Press was missing in action except for the biggest news events and our legislative session and each of the state’s biggest papers were cutting back as well.  When I heard about this idea of South Dakota News Watch focusing on the “big” regional and state-wide stories that otherwise wouldn’t get covered, I signed on as a founding board member.  We also decided to back that up by becoming a donor, which we still are to this day.

News Watch has filled a large reporting gap that emerged in the last decade.  And it shows, as you see the South Dakota News Watch bylines in our local news sources once and even twice a week. No one else is covering those important topics.

You have had a long and amazing career both in and out of journalism.  What advice or words of wisdom might you give a young graduate in journalism and communications today?
Accurate and informative news reporting is needed more today than ever.  If you enjoy writing and storytelling, and making a difference in today’s contentious “my way or the highway” world, then look into journalism as a needed and worthwhile career.  The satisfaction you’ll get for telling the story first, or telling the story again with a new twist, is unmatched.

You’ve been an early supporter and founding board member of South Dakota News Watch.  What would you tell a new prospective donor about why it’s important to support the  News Watch mission?
If you expect certain things from your local and state governments, an environment that’s clean, a safe neighborhood, schools where you child and grandchild can thrive … one way to meet those expectations is to contribute to South Dakota News Watch, putting your dollars to work to support reporters watching every day for the story where “that” is happening “as expected.” And when it’s not, when things have gone awry, reporting why we have a mess on our hands. Your SDNW donation makes a contribution to your community and state.

AND, if you don’t donate, who will?  That’s the critical question.

Mark Roby is a passionate donor to South Dakota News Watch and has been instrumental in finding other supporters in the Watertown area and beyond who share an interest in nonpartisan investigative news.  Mark and his wife of 42 years, Ronda, still reside in Watertown, and have three children and 10 grandchildren.