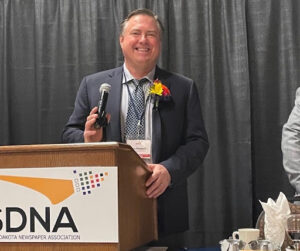 Hello to all those in the First Amendment Society. On behalf of myself, Investigative Reporter Stu Whitney and Intern Reporter Kylie Carlson, we want to share a few updates on the good work published over the past couple of months and also to look ahead to great journalism yet to come.

The News Watch content team produced several examples of high-impact statewide journalism in May and June 2022.

In May, we published a two-part, in-depth look at two proposed carbon-capture and sequestration pipelines headed for construction in eastern South Dakota. The articles, which generated an audience of more than 33,000 unique Facebook users and a whopping 17,500 Facebook reader reactions, was the culmination of a year-long grant collaboration with the Solutions Journalism Network. The package broke new ground in explaining to readers the science, risks and potential benefits of the pipeline construction and carbon-caption processes.

In June, I teamed up with reporter Stu Whitney to publish a three-part series on how politics and the divisive national culture wars are affecting public education and the teacher shortage in South Dakota. The project, which drew a Facebook audience of 22,500 readers, culminated with a “South Dakota Matters” online panel discussion on June 16 that explored the topic even more deeply through the input of four statewide education experts. Both reporting efforts resulted in articles that received very heavy usage by traditional news media across the state, including daily and weekly newspapers and KELO-TV as well as South Dakota Public Broadcasting. I made two appearances on SDPB’s “In the Moment” radio show to discuss the findings of those projects.

Whitney also did great work on the evolving attorney general’s race in South Dakota, and Kylie Carlson drew a strong online and print audience with her examination of wet weather that delayed planting for many East River farmers.

News Watch was well represented at the annual South Dakota Newspaper Association convention in Mitchell in May. I was joined by board chair Jack Marsh and executive director Rob Joyce during the two-day event. I was fortunate to serve as master of ceremonies at the annual banquet and also led a journalism seminar on how journalists can improve coverage of rural communities and small towns. Throughout the convention, I received extremely favorable reaction from newspaper publishers, editors and reporters in terms of the journalism provided by News Watch each week, and also gained valuable input into how we can improve our processes even further. News Watch content team members also attended virtual journalism seminars during the INN Days online conference in June (hosted by the Institute for Nonprofit News trade group, of which News Watch is a member). The training sessions were helpful on a number of fronts — from improving watchdog journalism to establishing new collaborative partnerships — with great insight provided by colleagues in the nonprofit journalism industry.

Regional recognition for work in 2021

News Watch was informed in May that we had won three regional awards in the Great Plains Journalism Contest hosted by the Tulsa Press Club. My work from 2021 was a finalist in three news categories in the contest open to the biggest newspapers and nonprofit journalism organizations in eight central U.S. states. Recognition included: finalist in Investigative Reporting for articles on questionable COVID grants received by a South Dakota state senator’s son; finalist in Specialty Feature category for a series on the child-care crisis in South Dakota; and finalist in Business Feature for articles examining the growing dairy industry in South Dakota and increasing use of robotic milking.

Regarding the COVID grant article, the judge noted: “Great example of investigative reporting to hold people and government accountable. The reporting in this is impressive and not only includes great use of traditional public documents — tax and property records — but the reporter also used archived testimony on an unrelated matter … that confirmed what the reporter had learned.”

The content team is hard at work on several projects that we believe will prove invaluable to the public and policymakers of South Dakota. In addition to our plans for strong weekly, in-depth coverage of important news topics, we also expect to publish a series of important articles very soon based on results of our next “South Dakota Matters” statewide polling effort that will explore public opinion on several newsworthy and timely topics.

Feel free to reach out

One big asset of the News Watch content team is our willingness to listen to feedback and input from any source, including our valued First Amendment Society members. You should all feel free to write to me or Stu Whitney at any time with comments, suggestions or story ideas. We can be reached at bart.pfankuch@sdnewswatch.org and stu.whitney@sdnewswatch.org. From our team to you … have a safe and happy summer, and stay tuned for more great journalism to come.